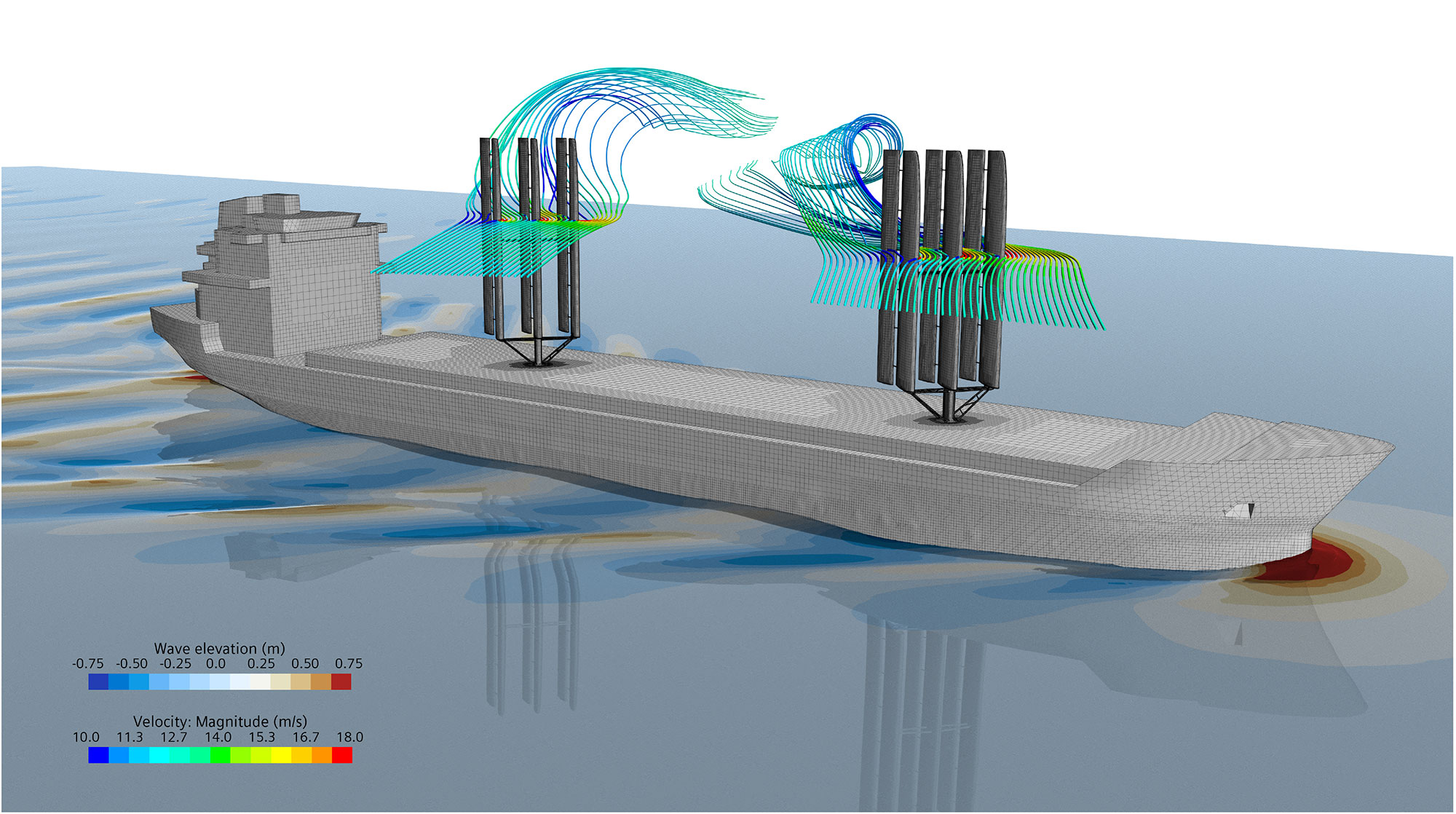 Cape Horn Engineering has developed a simulation workﬂow to directly compare the eﬃciency of wind assisted propulsion (WASP) devices. The simulations take into account the most important eﬀects of adding the wings, Flettner rotors or any other type of wind powered device to the vessel. Both the water ﬂow experienced by the hull at a given vessel speed and the air ﬂow experienced by the hull top sides, superstructure and WASP devices, at a certain wind speed and direction, are modelled simultaneously in a single simulation.

The wind conditions above the water surface are modelled with an accurate wind proﬁle taking into account the atmospheric boundary layer wind gradient, which results in a variable wind speed and direction at diﬀerent heights. In the simulations, the vessel is sailing at constant speed, and an actuator disk models the eﬀect of the propeller. Depending on the vessel resistance and the amount of thrust generated by the WASP devices, the actuator or virtual disc model determines the propeller RPM and propeller torque and thus delivered power.

The simulation further considers the deformation of the free surface of waves generated by the vessel, the dynamic sinkage and trim, the drift or leeway angle, the heel angle and the rudder angle to keep a constant course. Thus, 6 degrees-of-freedom are considered.

The wind forces on the hull, superstructure and WASP devices induce the drift and heel angles, with the rudder angle changing during the simulation with the application of a PID controller, balancing the yaw moment of the whole system. The vessel speed is constant with the propeller RPM, and therefore torque and power, responding to the drag of the hull and thrust from the WASP device. The thrust produced by the propeller balances the degree-of-freedom in direction of travel.

When the simulation converges to a quasi-steady solution, diﬀerent WASP conﬁgurations can be directly compared by comparing the delivered power of the propeller and thus a direct measure of the fuel (and emissions) saving potential can be assessed. 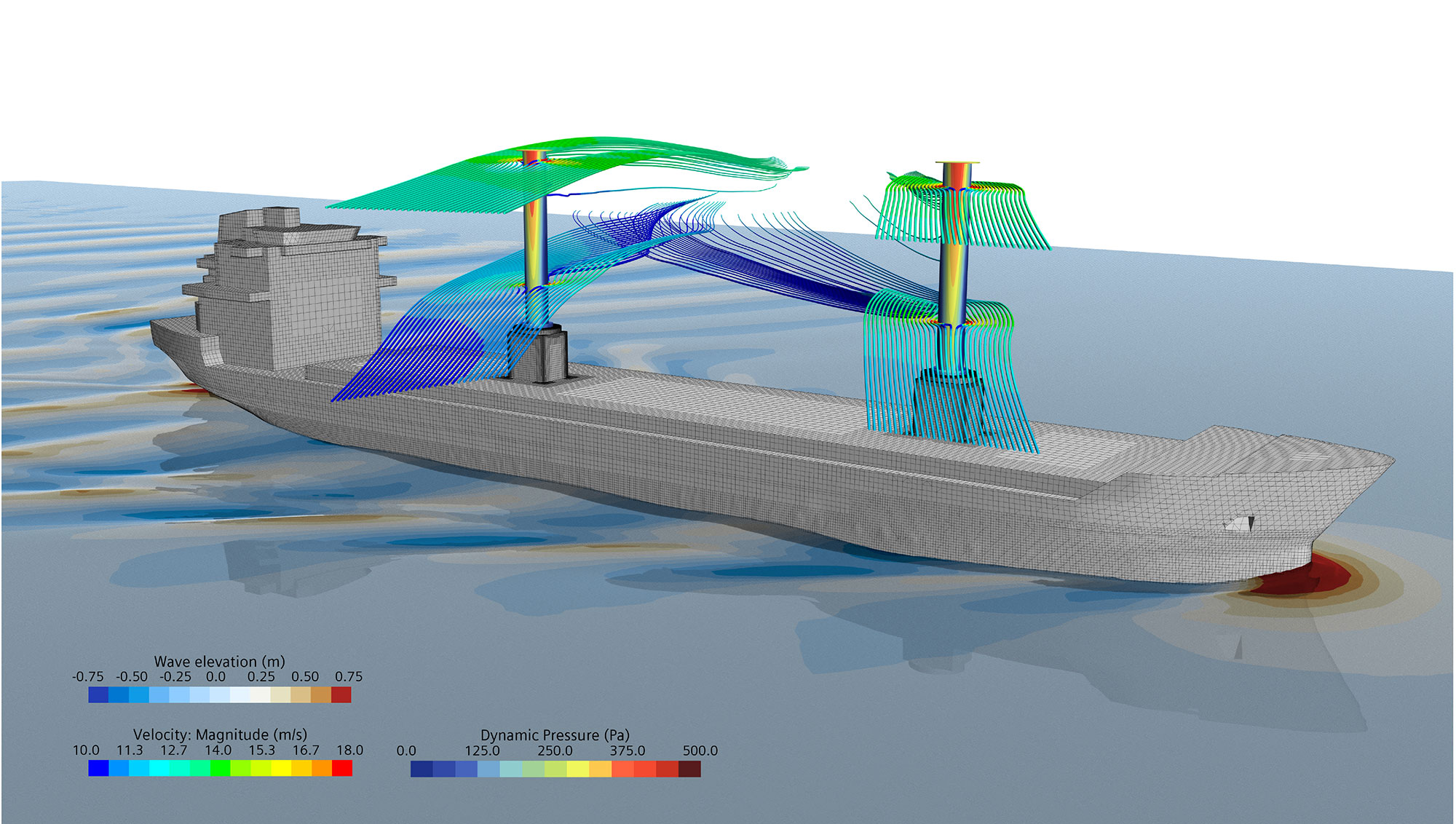 For the case study presented here, three conﬁgurations have been compared. We used the vessel Regal because enough benchmark data is available, as this vessel has been the object of study in the Workshop on Full-Scale Ship Hydrodynamics organised by Lloyds Register in 2016. The ﬁrst conﬁguration is for the vessel is without WASP devices. The second conﬁguration is adding 2 solid wing setups. The solid wings are based oﬀ the WindShip Technology’s patented 3-wing-3-ﬂaps assemblies, not in their latest design, and scaled to be 22 metre in height. The third conﬁguration contains 2 Flettner rotors instead of the solid wings. The dimensions of the rotors are used without any further considerations, and are approximately as tall as the wings. It is to be noted that at the time of writing, no attempt has been made in trimming the angles of the wing’s main assemblies and ﬂaps for best performance. The trim angles have been chosen such as the ﬂow is attached and the wings are producing a reasonable amount of thrust. The same trim angles were used for the forward and the rear wings. Likewise, the rotor dimension or operating speeds were taken as nominal values with no optimization study performed. The rotor rotation rate was chosen to be a reasonable value of 300 RPM, the same for both forward and rear rotors. Thus, the aim of this study is not to give a quantitative comparison and show the merits of one type of device over the other, but rather to demonstrate the capabilities of the developed simulation setup to compare diﬀerent types of WASP devices with a highly accurate all-in-one 6-DOF hydrodynamic and aerodynamic simulation.

For the cases presented here, the boat is sailing at 12 knots, with a true wind speed of 20 knots and the true wind direction (course wind direction relative to the direction of travel) is 90 degrees from the starboard side. The tables below show the propeller delivered power for the 3 conﬁgurations, WASP devices driving and side force, rudder angles (negative is weather-helm), heel angle, drift angle, trim angle, and rotor consumed power. 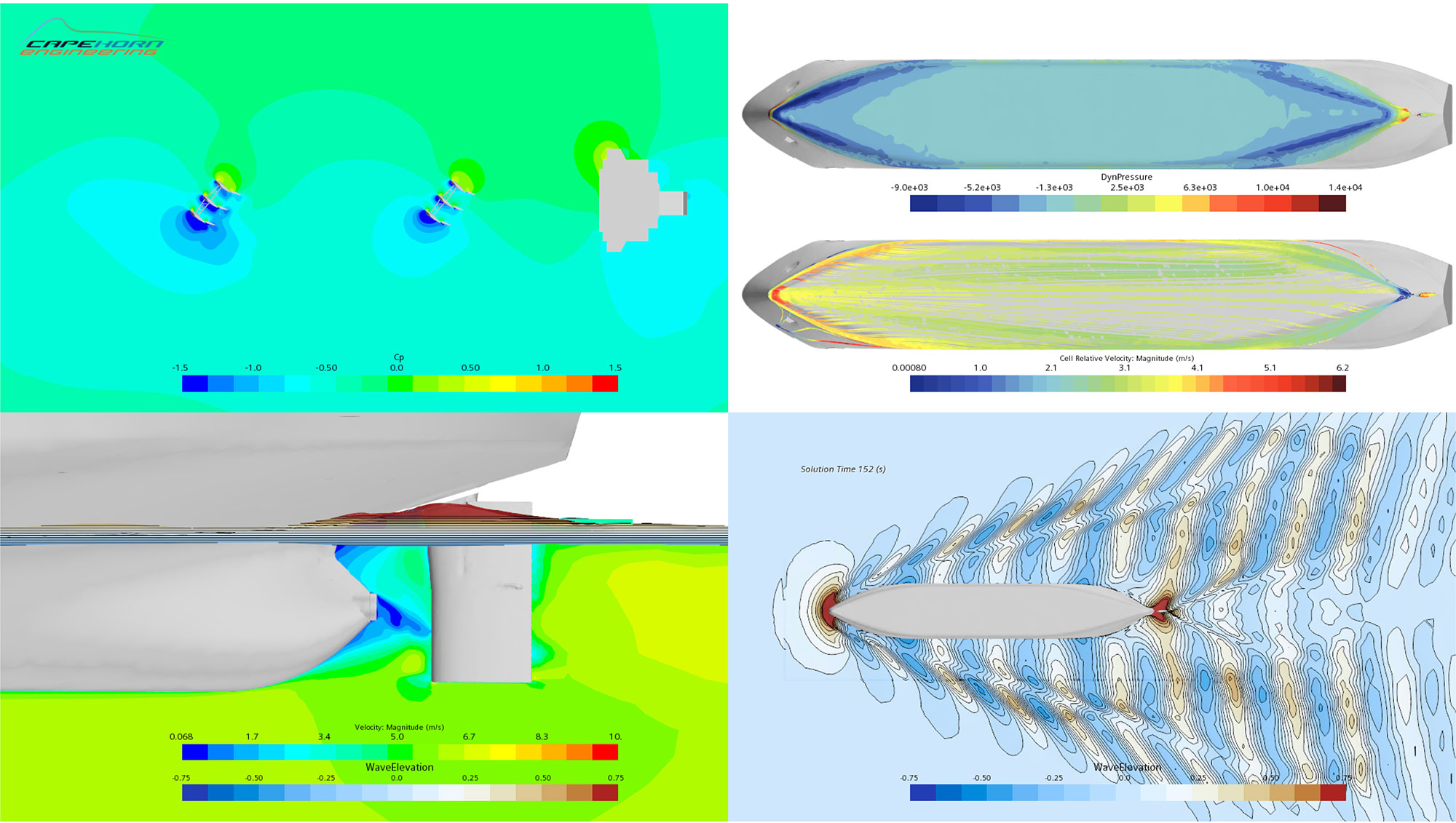 In the past, Cape Horn Engineering have performed optimisation analyses that would be highly applicable here. Most notable is the WindShip performance and optimisation study, completed in 2020, that compared many diﬀerent design parameters and operating conditions. The ﬁrst phase of the optimisation varied wing geometry, with parameters such as chord length, main/ﬂap element chord ratio, section proﬁles, wing-to-wing spacing and element gap size investigated until the highest performing geometry was found. The study then went on to ﬁnd the optimum operating conditions with a sizeable matrix of over 150 points. This matrix explored many variations of wind speed, wind direction, wing angle and ﬂap angle to ﬁnd the maximum thrust capabilities of the WASP device. The same process can be used when developing new WASP devices, and with a speciﬁc vessel in consideration, the designs can be specially tailored to suit the ships characteristics and operating conditions. Moreover, with the development of the latest simulation methodology outlined here, the ship design and WASP design can be coupled to achieve even greater performance improvements.

Cape Horn Engineering are proud to be involved in innovative wind propulsion projects to reduce emissions for the shipping industry, please see our case studies for more details: