Finally, a set of seakeeping simulations are performed to investigate the dynamic behavior of the final candidate hulls. These simulations ascertain that what is good in calm water does not become detrimental in waves. Due to the nature of these time consuming simulations, only regular waves are usually considered. To analyze a complete sea spectrum would require a statistical analysis over a large period of time, i.e. half an hour; however, the response to regular waves can be found in less than a minute of simulated time. Despite this restriction, the information gathered in regular waves is indicative of real sea state performance. Unlike a towing tank, no other simplifications are necessary; in our simulations, any wave direction is allowed, the boat is at full scale, the center of mass is in the right position and the moments of inertia will be the actual estimated values.

During our second Volvo Ocean Race campaign, we started an ambitious project aimed at assessing the performance of these boats sailing through ocean waves. The key question was whether design features that showed promise in calm water would perform well in waves; how much bow fullness was desirable and what was the real effect of spray rails. We ran many extreme design candidates, plus our reference hulls and final design hulls. We ran a series of characteristic ocean waves, from chop to swells, including different heights and directions. The yachts were fully appended and the simulations were run at full scale. In general, the yachts were allowed to move freely in heave and pitch. In some cases it was also interesting to look at roll and sway motions. The wave characteristics and sailing conditions were chosen to represent typical sailing conditions, upwind, reaching and downwind. At the same time, calm water simulations were performed with the same computational mesh to establish a reference. The force averages were obtained over the last motion period and compared to the calm water forces.

The computational effort required for each simulation in waves is comparable to simulations in calm water, this allows us to compute a large matrix of variations if required. The typical results of simulations in waves are:

Interestingly, we found drag reduction for appendages with certain combinations of oscillatory motions in pitch and heave. This effect is the well known Flapping Foil Propulsion. Yacht motions in short steep waves cause appendages to experience oscillating effective angles of attack and heave. Our investigations have shown that depending on specific characteristics of the motion, this results in reduced drag, or even a net propulsive force. In the diagram on the left the nearly sinusoidal blue curve represents the heave motion of the boat, and each horizontal line (red or green) is the relative longitudinal force on the foil. The calm water case is taken as the baseline. Any horizontal line extending to the right has less drag than the calm water case, and lines to the left have more. Red lines indicate a net drag force, while green lines indicate a net propulsive force. 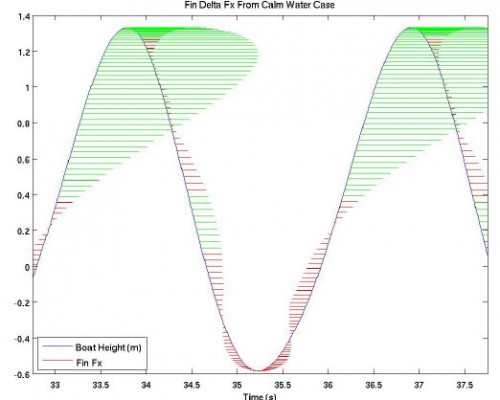 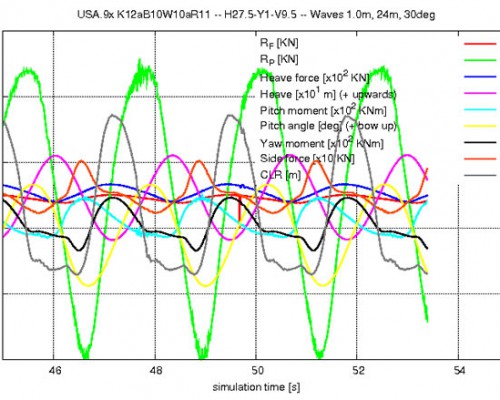 The advantages of seakeeping simulations compared to tank testing are extensive: