Humphreys Yacht Design are a leading international design studio, specialising in creating dynamic and cutting edge yacht designs for both sail and power.  They are committed to delivering optimum performance, efficiency, safety and manageability for their clients.

Since 2019, Cape Horn Engineering have been collaborating with Humphreys Yacht Design to assist their design team, by running an extensive CFD design campaign, to develop a custom 50m Explorer Yacht whilst working simultaneously on another project, the Arksen 85 Explorer.

The custom 50m Explorer Yacht has been designed with an aluminium hull and a superstructure partially in composite glass epoxy, for family use and global cruising, with exceptional efficiency, comfort and safety levels. The Explorer features a highly refined, fast-displacement hull form, light weight construction, hybrid propulsion, stabiliser fins in combination with a large gyro and capacity to carry large tenders and multiple toys.

The build contract for the 50m custom Explorer Yacht has recently been signed by JFA Yachts, France and construction of the yacht is currently underway, due to be launched in 2024. 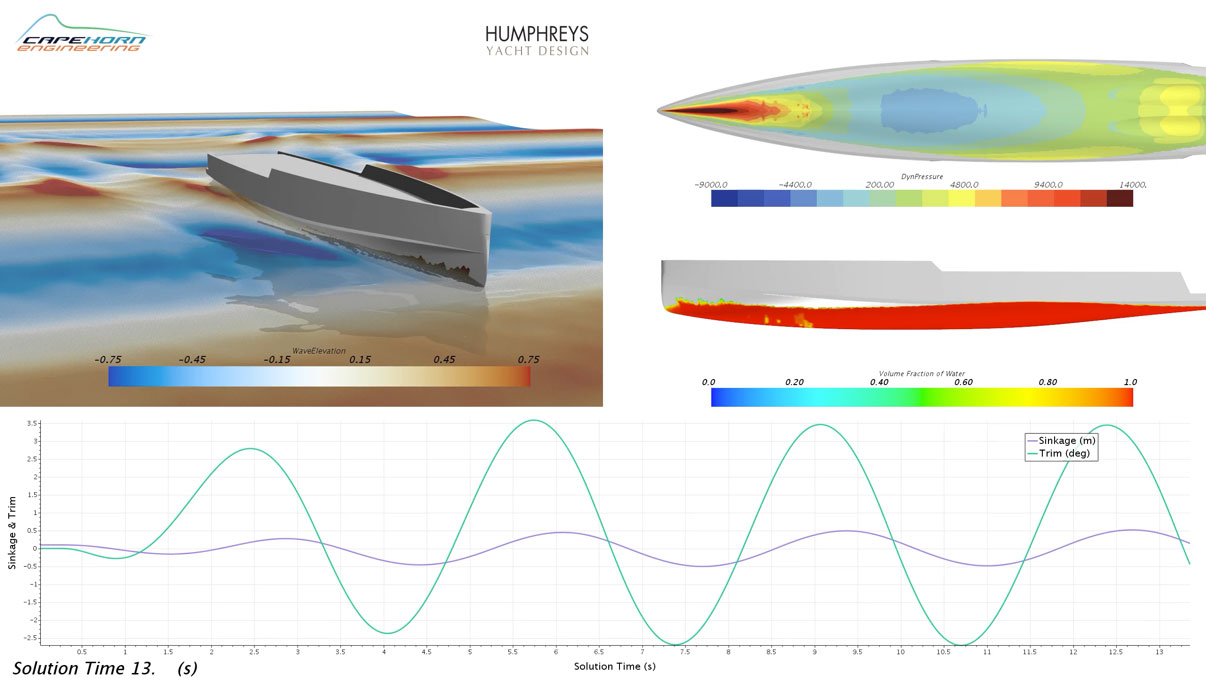 The entire design process was centred around optimising the performance of the hull in order to meet the owners stringent design requirements. Our comprehensive CFD studies were initially validated against known experimental data, before being used to drive the design process and reveal design improvements. At every stage of the study the performance and efficiency were incrementally enhanced in fulfilment of the design brief, as CFD facilitated the rapid investigation of numerous design options.

We began this project by simulating three reference hulls with known performance characteristics to validate our models. Following this, we proceeded with investigations of two initial development hulls.

CFD analysis was performed for all five designs to investigate the calm water performance of the vessel and the seakeeping characteristics. The addition of stern foils and interceptors to the two initial development hulls was investigated to determine their effects upon the hulls attitude and resistance in calm water. We investigated curved foils versus straight foils, varying the longitudinal position (close to the stern), the vertical distance to the hull, and the angle of attack. Additional investigations were carried out for the stern foil to study its influence on the damping of pitch motions and added resistance in waves. The seakeeping investigations were in head waves of 50m in length and 1.5m height. The vessel’s motions, heave and pitch amplitudes, vertical accelerations and added resistance were also determined. The vertical accelerations were obtained in three longitudinal positions in the yacht, in the centre of mass and at 10% and 80% of the yacht overall length.

After the initial analysis, another nine hulls were developed and investigated, with variations of volume distribution, wetted hull length, displacement, shape of the propeller tunnels and general hull shape variations. Performance and fulfilment of the design brief were incrementally improved with each new variation, as the design requirements evolved throughout the design process.

Turning Circle Manoeuvre of the Explorer following the ITTC Recommended Procedure for Full Scale Manoeuvre Trials. 6 DOF simulation with active rudders and fin stabilisers. The simulation is performed with the code STAR-CCM+ from Siemens Digital Industries.

Once the hull design was finalised, the addition of appendages was investigated. For this analysis, propulsion was modelled with an actuator disk which captures the main effects of the rotating propeller. The appendages were added one by one in order to be able to quantify their effect on total resistance. First the skeg was added to the bare hull, followed by the twin rudders, and the propeller shafts with their brackets. Then a pair of roll stabilizing fins, the bow thruster tunnels and finally interceptors of different deployment heights. This stripping method produced very valuable information about the single contribution of each type of appendage.

Finally, the CFD results were compared to model test results performed at MARIN in the Netherlands. While the yacht is being built, a study of the effect of loading conditions, displacement and centre of mass position will be performed to obtain further data for the different operational profiles of the yacht.

”Everything we help design is driven by our core values. Whether it’s a custom superyacht, a flagship new creation, an award-winning sailing yacht or a uniquely efficient motor yacht, we are experts in all disciplines and draw on our cross-sector knowledge and experience to continually push the boundaries. Our objective, always, is synergy. The whole is greater than the sum of its parts. This is embraced by our processes in which all aspects of a vessel is considered simultaneously, developing the full picture and allowing our analysis to drive the cutting edge of design. ” comments Dr.-Ing Rodrigo Azcueta, Managing Director, Cape Horn Engineering.