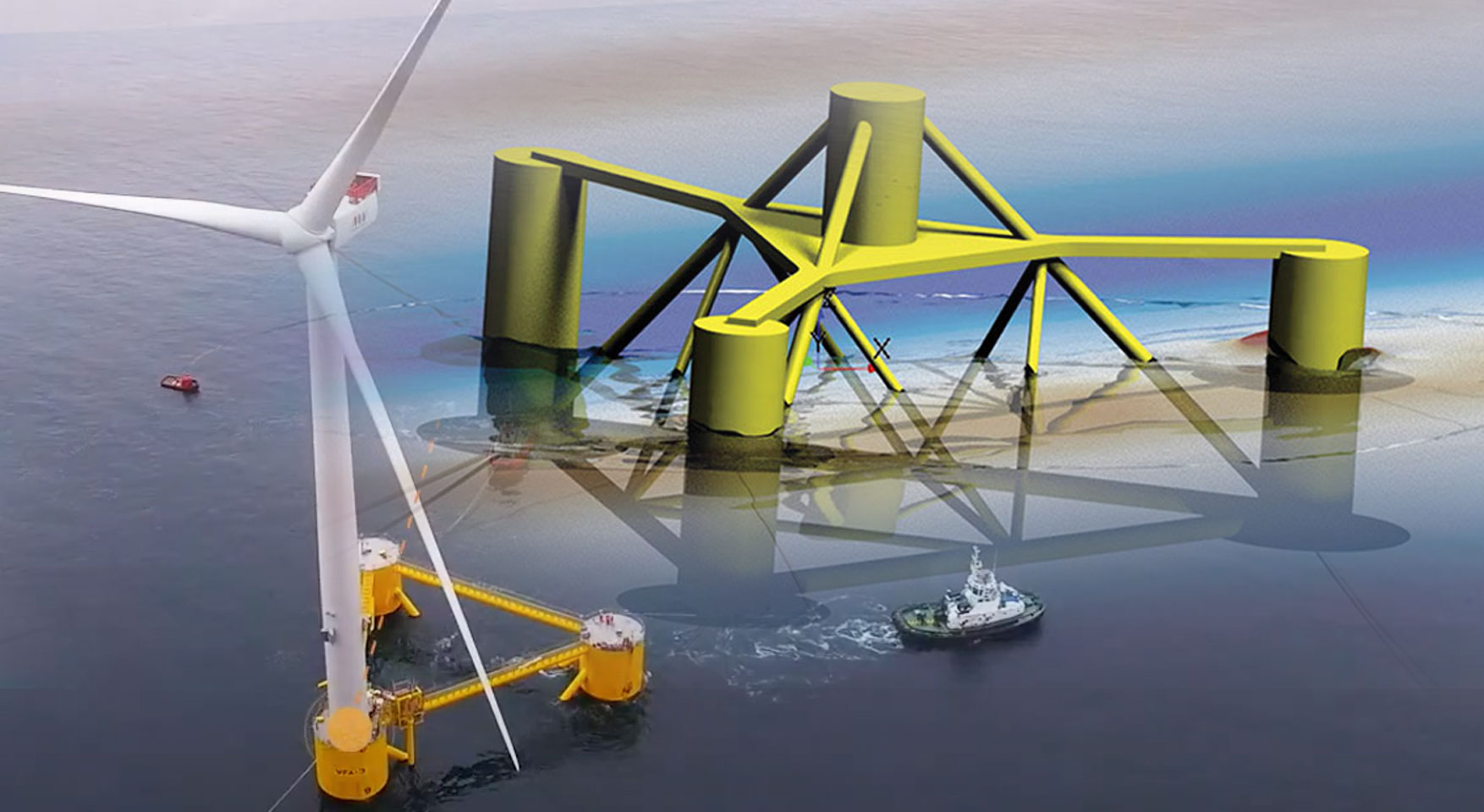 Cape Horn Engineering was appointed by the global energy company Repsol to conduct CFD simulations on two types of off-shore wind turbine platforms. Floating platforms are exposed to the challenging environment of high winds, strong currents and high sea states. This investigation was carried out to predict the behaviour of the two types of platforms in these conditions.

The CFD simulations run by Cape Horn Engineering take into account most of the physics of the dynamic problem, although at a much higher computational cost than traditional simplified methods of potential theory with viscous corrections such as the panel codes like WAMIT or methods based on the Morison equation. The CFD simulations are set-up with the Reynolds-Averaged-Navier-Stokes (RANS) equations and includes the free-surface and dynamic interaction between the fluid and structure.

The first type of simulations were used to compute hydrodynamic coefficients, i.e. added mass and damping, which were compared by Repsol to results from the code WAMIT for solving the radiation problem.

The simulations were run forcing the motion in each of the six degree of freedom at the time and at six different frequencies (periods 4, 5, 6, 20, 25 and 20 seconds). Subsequently, the values of added masses and damping were obtained computing a Fast Fourier Transform of the last two periods of the output oscillation.

In this type of simulations the platforms were free to move under the wind, current and waves in the six degrees of freedom, and are only constrained by the mooring system. The waves are modelled as fifth order harmonic waves.

Since the RANS simulations considered the flow turbulence and viscosity, all dynamic effects associated with added mass and viscous damping of the platform, including many geometrical details like secondary tubes and damping plates are taken into account. The total mass, centre of gravity and moments of inertia of the full-scale platform were considered.

The aerodynamic forces acting on the tower, nacelle and rotating blades were approximated by an aerodynamic model provided by the client that takes into account the exact attitude of the wind turbine with respect to the wind direction.

A few simplifications of the mooring system were necessary; the reaction force direction is assumed to be in a vertical plane that passes through the anchor and attachment points. When computing the catenary it is important to take into account the portion of the line lying on the seabed, so that the catenary length varies with the position of the platform. For this study, the friction between the line and the seabed was neglected. Lift, drag, added masses and damping, i.e. the whole hydrodynamic forces on the lines, and the aerodynamic forces for the portions above the water surface, were not considered. The bending and torsional stiffness of the line was neglected. Stresses in the line and attachment points were not computed.

The computational matrix consisted of eight different combinations of waves (height, period and direction), current (speed and direction) and wind (speed and direction) for each platform type. The output of the simulations were the time history of the motions, forces and accelerations as well as the occurrence of slack in the tendons of the TLP and lifting the chain of the mooring system from the sea bed.

This study was completed  a few years ago. The mooring system can be improved, avoiding most of the simplification in future work. Simulations have sped-up considerably, in part due to larger HPC capacities, and can be offered at a competitive price. Thus, these type of simulations could be used instead of more simplified methods currently used within the industry, offering a much greater certainty regarding the real motions and extreme loads in floating platforms and mooring systems.